The American Legion Baseball League started in 1925 with the Rayson-Miller team joining the league in District 7 in 1973. The team is comprised of young men from 13 to 19 years of age recruited from Pittsford Mendon HS, Pittsford Sutherland HS, McQuaid Jesuit HS, Aquinas Institute, Batavia Notre Dame HS, Honeoye Falls-Lima HS and Gananda’s Ruben A Cirillo High School. Tom Sapienza has been the team manager and coach since its inception. The Rayson-Miller Post Baseball team looks for commitment in its players. Rayson-Miller Post 899 understands that faith, parents, work, and school are priorities; however, the candidates must also understand that dependability and commitment to the team are also very important aspects for making the Rayson-Miller roster and also for making RM Baseball special.

The Rayson-Miller baseball team is doing very well this year. Go to District 7 American Legion Baseball for current standings and game locations. We also encourage you to "come out to the old ball game" and support these young men and enjoy the game!

Rayson-Miller Post 899 hosted a banquet for our RM Baseball players, coaches and our wonderful sponsors who generously donated to provide new uniforms this past season for our team.

Our present team consists of 17 members.

The American Legion Baseball league has had and continues to have positive impacts within Major League Baseball such as turning out many MLB players, managers, and commissioners, and has more than sixty program graduates in the Baseball Hall of Fame. Legion Baseball also has a reputation for serving the young people who play in the league. In college scholarships, the league annually awards a minimum of $25,000; $500 for a player selected from each state based upon leadership, character, scholastic achievement, and financial need. Some individual states may also award even more. Truly a character building youth program of the American Legion. 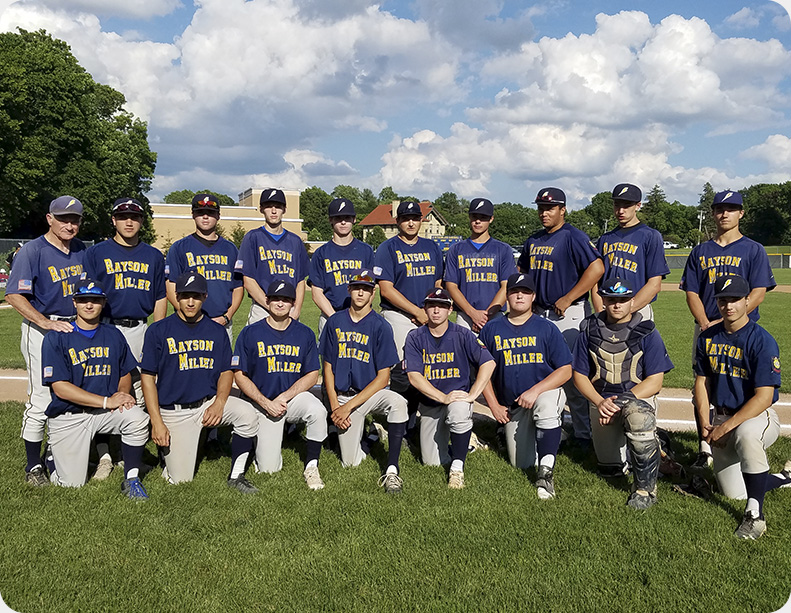